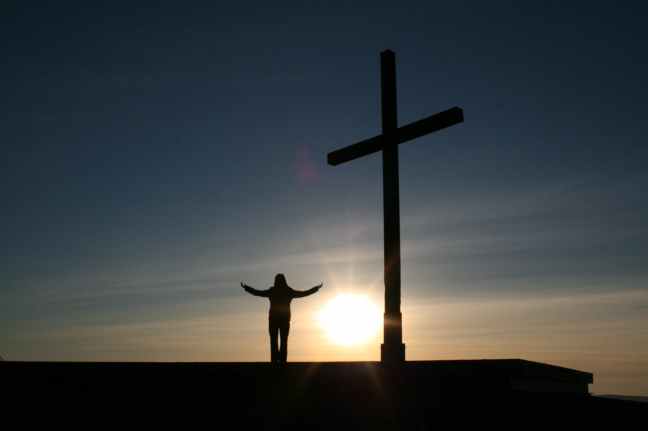 The contemporary service was about an hour long and consisted of around seven songs, with the occasional two-three versed prayer song. When I walked in there was music playing over the speakers, christian rock/contemporary music, and then as soon as the service begun, the worship band came on stage and began to play their introduction song. Everyone joined in, as there was a large screen off to the side displaying lyrics. The music was loud. Each vocalist had a microphone set so that you could hear their particular voice and every musician was also miced, including their instruments. I couldn’t even hear myself singing, and I think that was the point. Not in any bad way, just in a subtle motion to allow the low hum and drum of the music into the body without having to even participate. I am a trained singer and I know how to carry a sound, but some don’t and I think the point of the loud music is to help ease those that can not sing. When they stopped playing the minister greeted everyone and then encouraged the congregation, which felt more like an audience, to do the same thing. Sound erupted and a loud wash of “hello” “how are you” “my name is…” came across the large room. The sound was so immediate and loud that it startled me. The floor was carpeted in a thin layer and the ceiling was high, so the sound was able to easily travel. The sermon was the only moment of true silence during the service. There was no underscore of music, like there was for every prayer, offering, and communion moment. It was just the pastor speaking alone. There was power in this moment of silence. When he paused the whole room stood on end, energy froze and looked at him to continue. I think silence was one of the most impactful parts of this service.

The traditional service was also about an hour long in terms of time, but instead of a small band on stage, there was a full choir of probably 150 or more members, a full band, an entire orchestra, and seven lead vocalists. I was blown away with how many people were on stage. The space was massive with traditional style pews, differing from the contemporary space that had regular chairs. The lead vocalists were miced with handheld microphones and the choir and orchestra had spatial mics to pick up their sound from a distance. The minister goes back and forth between spaces so some weeks he is in the traditional service and other weeks he is in the contemporary service. For the service he is not present in, they stream a video of him to the next room. I was very surprised at this factor and in many ways seeing the video of this man preaching to a room he was not even physically a part of gave a new obstacle of sound. He was connecting to a room full of people that would laugh in different parts of the sermon or “ohh” and “ahh” in a segment that the people in the traditional service did not practice the surprise in. It was intriguing to me to acknowledge the fact that he was not connecting deeply to his “audience” or “congregation.” The music became the most important piece of the service because it had to draw and keep the people in the room before and after the sermon. The congregation needed the act of physicalization in some way and that was fulfilled by the many voices and sounds on stage. They seemed satisfied after the service. The music had filled the space where the preacher would have stood.

Both of these services brought a new light to the concept of sound in a contemporarily traditionalized Christian church. All of the elements of a traditional service were there: a robed choir, an organ (not played, but present), a piano. However, this service was in no means traditional: no hymns were sung out of a hymnal, the chorus sang only contemporary songs, the organ did not get played, and the piano was also quiet. There was no true repeated structure of the service. People in both rooms seemed to be moved by the spiritual songs, but acted like it was a given that they should feel moved or they wouldn’t come back. I asked a few people what they thought of the music. An elderly (late 70’s) woman said, “Oh dear, I love to hear those pretty voices up there sing away. God surely chose their voice for a reason.” A younger (recent OU graduate) man said, “I don’t really come for the music, but it’s a nice time to reflect.” Both comments showcased how the music was not the main part of the service for the two, but that they enjoyed it regardless. I realized then that the sound was impactful to the industry of Christianity in a mega church. Necessary, but not entirely useful. Almost anything that happened could have been easily replaced or changed over time. Sound was constant, but used more as a low hum to surround people and bring comfort, not as a guide or a spirit in the religion; this is only my opinion as an outsider of course.

Mormons, Musical Theater, and Belonging in America is available for pre-order!